Bathabile Dlamini Fined R200k For Perjury As The Rest Of The ‘Gang’ Have Their Say Outside Court..Despite being given two weeks, ANC Women’s League (ANCWL) president Bathabile Dlamini was unable to come up with the R100,000 needed to pay her fine and keep her out of jail.

She was on Friday sentenced to a R200,000 fine for perjury, half of which was  suspended.

Her lawyer managed to negotiate that she pay R20,000 and the rest by April 29.

Sitting in the dock she cut a sad figure, her head down as media took photos of her.

Bathabile Dlamini has been given a R200k fine or 4 years prison term 2 years suspended for 5 years@TimesLIVE pic.twitter.com/LeWDjX5DaU

Despite his insistence that she could not afford the fine, Dlamini arrived in court dressed in what appeared to be a designer outfit and shoes and sporting an expensive handbag.

She completed the look with gold earrings, a large gem in each, a gold necklace and a large gold ring on her wedding finger.

As ANCWL president, Dlamini, 59, earns R70,000 a month to which she adds a R40,000 pension. She has two dependents according to court records.

Dlamini sat forward as she listened to the barely audible proceedings.

Magistrate Betty Khumalo was scathing in her sentencing.

Dlamini was convicted of lying under oath last month when she gave false evidence in 2018 on the appointment of SA Social Security Agency (Sassa) work streams.

Khumalo said it was untrue that Dlamini did not benefit from the Sassa debacle.

“[Perjury] is a serious offence,” Khumalo said, “the sentence needs to deter her from committing the same offence again and it needs to deter would-be offenders.

“She is still an active member of society, people look up to her, she is a role model and millions looked up to her for their grant.” 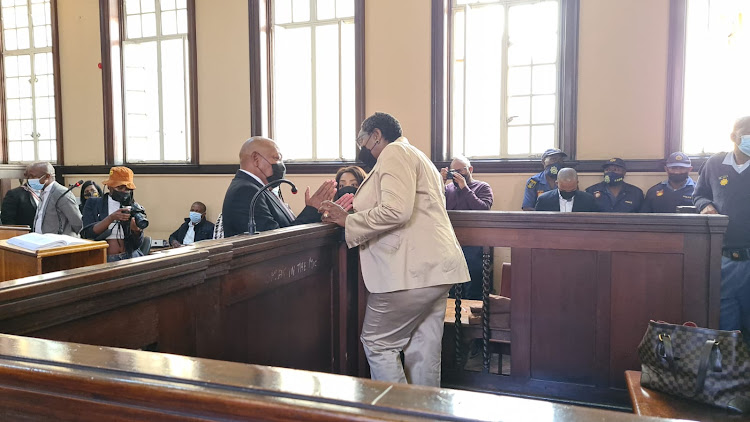 She said Dlamini’s part in the “Travelgate” fraud scandal in 2003, in which MPs were found to have abused travel vouchers, had not been expunged from her record.

“It goes without saying that both [convictions] have an element of dishonesty and misrepresentation and sentencing [for this crime] should be considered [with the previous conviction in mind].”

Khumalo also lambasted Mphahlane for asking if Dlamini could pay a portion of the fine and not the whole amount — and remain out of prison — as she did not have the funds.

Khumalo said she had given Mphahlane two weeks for sentencing so he could get Dlamini’s affairs in order.

Once sentenced Dlamini had her fingerprints taken in court.

She was supported by suspended ANC secretary-general and corruption accused Ace Magashule as well as Carl Niehaus — controversial former spokesperson for the disbanded Mkhonto we Sizwe Military Veterans Association.

Former North West chair Supra Mahumapelo, who was cleared by the public protector after the delivery of a R1.5m herd of cattle for former president Jacob Zuma, was also present along with various ANCYL members.

Outside the courtroom, Dlamini’s supporters gathered, singing struggle songs and showing their allegiance to the ANC.

When Dlamini and the others joined them — over an hour later — she was swamped by her female fans.

“Thanks to Jesus!” another responded as supporters swarmed the leaders, forcing them onto Fox Street.

As the crowd gathered and cheered, the back of a camel-coloured twin-cab bakkie served as a crammed makeshift stage, the speakers. 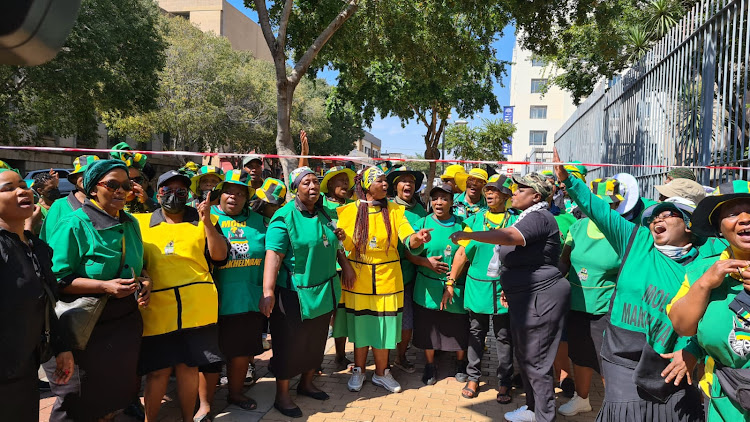 What followed was a two-hour plus exercise in self-indulgence as every leader took advantage of the microphone.

Mahumapelo was the crowd favourite.

He mistakenly told the crowd that Dlamini had been given a R400,000 fine.

He said judge Khumalo declared that “Comrade Batha ‘should not go to the cells’”.

“Even if she is found guilty — she must not go to jail — she was given a fine,” he said.

His message was met with “praise the Lord! and God is great”.

Mahumapelo would make the sound of the La Cucaracha horn — bo bo bom — whenever a leader went over time.

“We have seen the evil plans — they have not succeeded,” he said referring to a ‘faction’ in the ANC.

“Comrades wanted to see her already going to jail. Tell no lies, there are no easy victories.

“I say to comrade Paul [Mashatile, former minister of arts and culture and ANC leader] slow down. Never put yourself first.”

He was referring to Mashatile’s says that Dlamini should step aside over the conviction.”

Mahumapelo then spoke for an hour.

“I’m tired of defending people who were not even there during the revolution … Where were they [ANC members who have not sided with Magashule and Dlamini, like the president] when Carl [Niehaus] was working with Mandela?” he said.

He then addressed the land issue and said “We never hated whites,” but that they were not going to allow whites and Afrikaners to have all the land.

He said he was “a strong tiger, running as fast as a cheetah”.

“I know what I’m fighting for I know what [former president Jacob] Zuma fought for.”

He then slammed Julius Malema and chief justice Raymond Zondo before praising the Cubans for “saving our lives” with Covid-19 vaccines.

Scenes from the Joburg Magistrate Court after Bathabile was fined for perjury. pic.twitter.com/zbbyBiUETp

He then spent half an hour slamming the media for “lying” about him and Dlamini, but said the media should report fairly even if he did something wrong.

By this time, most of the audience had dissipated and those left were talking among themselves.

By the time Dlamini had her chance to speak there were about 30 people left and the traffic was able to flow again on Fox Street.

She did not have much to say and said almost nothing about her sentence, besides telling her children that she may go jail.

She said it hurt her that some ANC women leaders had stayed at home instead of coming to support her.

But she was grateful for the leadership from KwaZulu-Natal, the North West, the Eastern Cape, Gauteng and other regions, who came to support her.

“Your support means everything to me, thank you.”