Colombian drug lord ‘Dairo Otoniel’ arrested in biggest blow to drug trafficking ‘since the fall of Pablo Escobar,’ said president.. Colombia’s military has captured drug lord Dairo Antonio Usuga, known as Otoniel, in what has been called “the biggest blow to drug trafficking in the Andean country since the death of Pablo Escobar,” according to President Ivan Duque.

Otoniel, 50, has been accused of sending dozens of shipments of cocaine to the United States, killing police officers, recruiting minors, and sexually abusing children, among other crimes, Reuters reports.

He imported 73 metric tons of cocaine into the US between 2003-2014, say Miami and Brooklyn indictments, according to The Washington Post.

He was captured during ‘operation Osiris’ in Colombia’s Uraba region, located in Antioquia province, on October 23. He had been living the life of a fugitive for many years and supposedly slept in a different rural location every night, according to The Washington Post.

Otoniel was the leader of the Los Urabeños or the Autodefensas Gaitanistas, which the US Department of Justice website describes as “a heavily armed, extremely violent criminal organization composed of former members of terrorist organizations.” 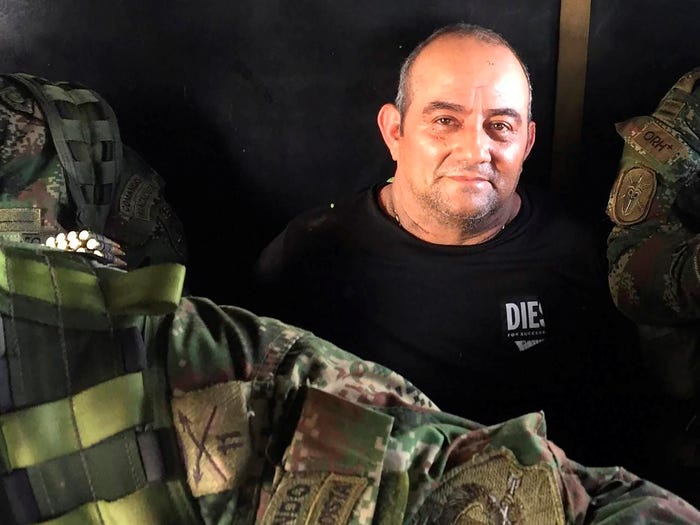 Before he was captured, the Colombian government offered 3 billion pesos (roughly $800,000) for information concerning Otoniel’s whereabouts. The US government had offered a $5 million reward for locating him.

“This blow is only comparable to the fall of Pablo Escobar in the 1990s,” said President Duque said during a broadcast video message. “

One police officer died during the operation, Duque said.

Though government officials have said Otoniel’s capture represented the end of the Clan del Golfo, Colombia Risk Analysis director Sergio Guzman has pleaded caution, saying a new leader would surely be waiting to take over.

“It’s a big deal because he’s the biggest drug kingpin in Colombia,” Guzman told Reuters, adding that the capture would not change the fundamentals of drug trafficking. “Otoniel is bound to be replaced.”