Potential users were able to get a preview of how the app would potentially look via iPhone screenshots posted on its Apple App Store listing. The TRUTH Social app appears to have functions that let people “follow” each other and repost messages.

The app’s interface also appears to bear a striking resemblance to Twitter, particularly where its profile page is concerned. In the screenshots, the profile page on TRUTH Social’s iPhone screenshots features a circular display picture set against a cover photo, accompanied by a bio and one’s follower count. Twitter has a similar set-up on its iPhone app.

According to the app’s listing, it will contain features like a “TRUTH Feed,” where people can “get the scoop on the latest thoughts and activities from the people, organizations, and news outlets that interest you.”

The app also touts as its key features its “Search” function, with the description of this feature reading: “Search for a voice that you find interesting and easily follow them right from the search list or view their profile first before deciding.” 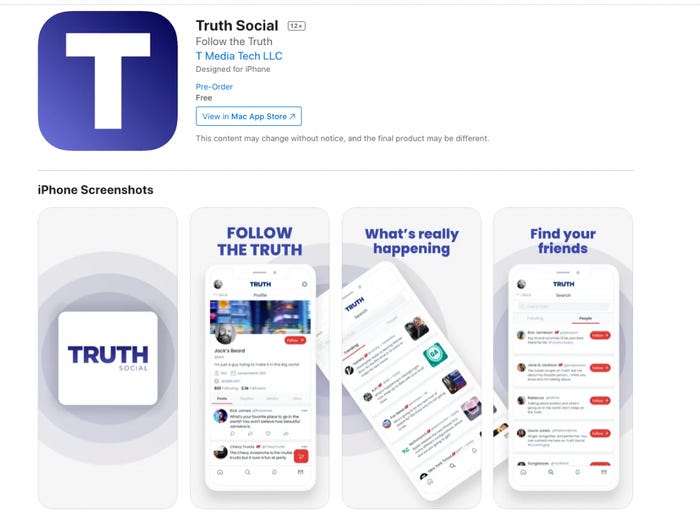 On Wednesday, the former president announced that he plans to launch TRUTH Social in the first quarter of 2022. The app’s App Store description outlines its “Big Tent” approach to social media use, which it claims will promote “inclusivity.”

“Think of a giant outdoor event tent at your best friend’s wedding. Who’s there? The combination of multiple families from all over the United States, and the world,” read the description on TRUTH Social. “Uncle Jim from Atlanta is a proud libertarian. Aunt Kellie from Texas is a staunch conservative. Your cousin, John from California, is a die-hard liberal. And guess what? They’re all together to have an amazing time and share their viewpoints of the world.”

Trump said in a press statement released on Twitter through his spokeswoman Liz Harrington that he created TRUTH Social “to stand up to the tyranny of Big Tech.”

The former president has been permanently banned from Twitter. He is also barred from Facebook until at least January 2023.

U.N. to give $300 million a year cash handouts to families with children and aged to avert mass poverty in Afghanistan

WHO on Tuesday, reveals that Africa has made tangible progress in reducing new HIV infections

Kyle Rittenhouse says he intends to destroy the AR-15 rifle he used in Kenosha.

Australian police arrests three people who broke out of a Covid quarantine compound in the middle of the night.