Durban Floods Affect Water‚ Electricity, Burials and Healthcare Services..  At least 45 people had lost their lives during devastating storms that battered KwaZulu-Natal by on Tuesday afternoon, leaving destruction in their wake since Sunday.

The provincial education department also confirmed that among the deceased were seven pupils and one teacher.

In a statement on Tuesday, co-operative governance and traditional affairs MEC Sipho Hlomuka said the latest reports indicated more than 45 people had lost their lives as a result of heavy rain.

This number looks set to rise as more incidents are reported.

eThekwini municipality said the city had suffered an unprecedented amount of damage to infrastructure though landslides‚ flooding and washaways overnight.

“The city’s emergency personnel have been responding to calls throughout the night and have been working around the clock to restore services as soon as possible. The city calls on the public to be patient and understanding as there will be delays in restoring services‚” said municipal spokesperson Msawakhe Mayisela on Tuesday.

He said numerous areas suffered water and electricity outages caused by loss or damage to infrastructure. There were also incidents of looting of warehouses and damaged cellphone towers. 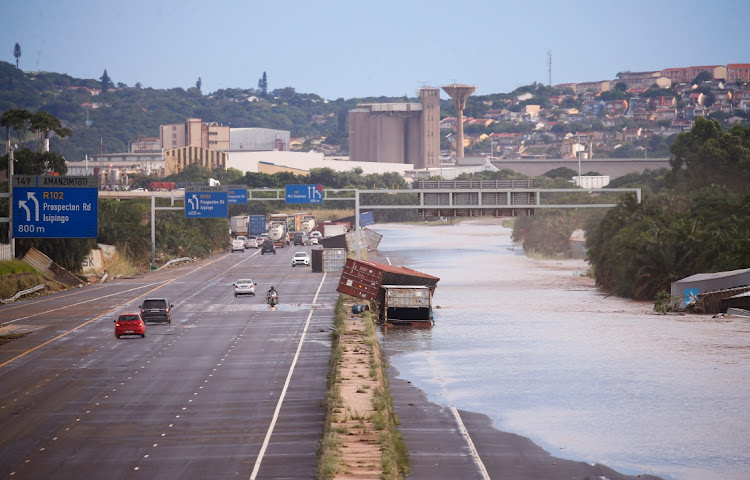 The municipality would not accept any requests for burials until the weather cleared.

“This is due to the ground being saturated. The city calls on the public to postpone any burials until the city cemeteries are able to conduct these again‚” said Mayisela.

He added that refuse would also not be removed.

“The city would like to advise residents of the suspension of street sweeping and refuse removal services. Residents are requested to keep refuse inside their properties to avoid spillages and blockage to storm water drains. Garden sites are also not operational and cannot accept any waste during this period.”

Bus services were temporarily disrupted due to flooding at depots, and inaccessible routes.

Some healthcare facilities could not operate due to damaged infrastructure and staff being unable to get to work due to road closures.

“The municipality will continue to assess the situation and advise the public of developments‚” added Mayisela.

“One of the fundamental factors that have influenced incidents in many areas where we received reports‚ is that they are as a result of the landslides. It has nothing to do with the drainage system but they are in areas where there is soil that is moving. So if those houses are built on steep hills then it may wash away.”

Kaunda said the city was being aided by the city of Cape Town which was sending a helicopter to aid with air support.

Hlomuka said the provincial disaster management centre was working with the army and other stakeholders to provide aerial evacuation for teachers and pupils trapped at Tholulwazi Secondary School in Molweni, outside Durban.

Hlomuka and KZN premier Sihle Zikalala visited two families in Georgedale, outside Pietermaritzburg, who had each lost five members when heavy rains caused a mudslide.

In the Eastern Cape, teaching at Nqonqweni Primary at Nqonqweni village in Qonce, as well as normal road travelling, were disrupted as vehicles could not travel due to muddy roads after heavy rains hit the village on Monday night.

Nokulunga Dasayi, a public servant, could not go to work on Tuesday due to impassable roads.

“There was no scholar transport to take our children to school because the road is wet and muddy,”  Dasayi said.

“Nqonqweni Primary teachers could not access the school either. There was not even one vehicle able to travel in our area.”

“We are in constant contact with and taking advice from SA Weather Services and our next move will be informed by that,” Binqose said.

He warned motorists to be cautious if they have to be on the road at all.