Skip to content
Advertisement
South Africa
admin
No Comments
Nurse Lives To Tell Tale After Horror Police Shooting…  A Gauteng nurse is walking on crutches after she was shot at countless times while driving home, allegedly by crime intelligence police officers who were following leads on a kidnapping incident.

Charlotte Rampaku, 48, a specialist theatre nurse at Carletonville Hospital, was driving with her daughter from Alberton to her home in Westonaria on Monday night when her car was shot at. She was hit by one bullet on her right thigh.

Rampaku and her daughter Lethabo, 19, had just visited her sister in Alberton.

”We were driving from Alberton around 9pm and when we arrived in Westonaria, we turned by the stop sign near the municipality. I saw that there was an unmarked white BMW following me at a high speed. I thought it was a hijacking so I drove faster. When I got to the next stop sign I saw blue lights from this car and I stopped.

”When I stopped the people in the car started shooting at me. I told myself that police cannot shoot at us. I thought it was criminals posing as police. I then drove to the Westonaria police station and found the station’s gate locked. I hooted several times but I did not get help,” said Rampaku.

Rampaku said the white BMW followed them to the station.

”When it arrived, those people kept on shooting at us. They shot me in my right leg. I opened my window and told them I am a woman and they should stop shooting. They shouted that we should get out of the car because we are suspects in a kidnapping,” said Rampaku.

She said they got out of their car and sat on the lawn by the station.

“They said we are suspects in a kidnapping and we dropped off someone at the Gulf petrol station. We told them that is not true and we live in this area [Westonaria],” she said. 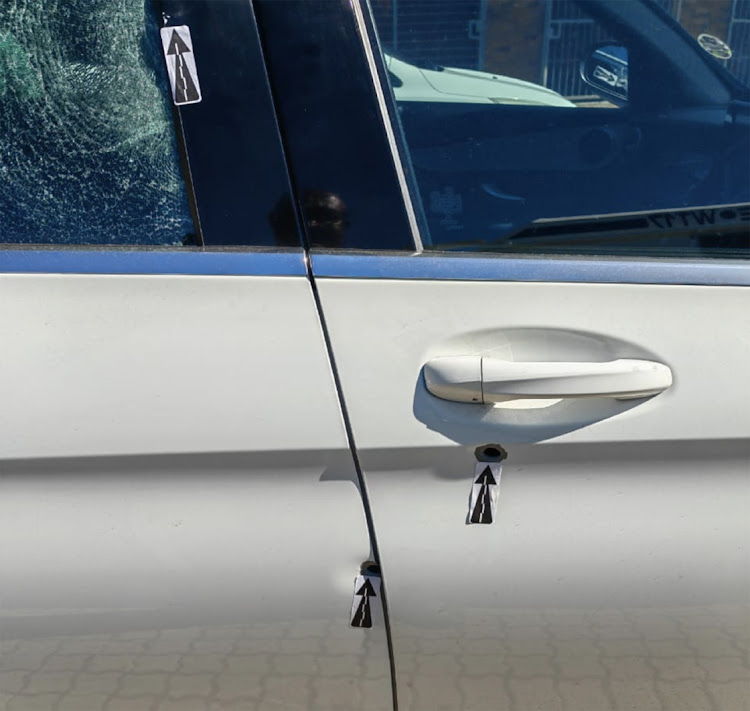 Rampaku said her husband, Luka Rampaku, 49, arrived at the station shortly after they got there.

“My daughter called him while we were being shot at as we were driving away from the car that was following us. After he arrived, police officers arrived and an ambulance was called and I was taken to hospital.”

Rampaku, who was discharged from hospital on Thursday, said she was still traumatised by her ordeal.

“I am still in pain. When they were shooting at us I thought it was my last day on earth. I was praying to God. Those people were shooting to kill us.”

Luka was furious about what happened to his wife.

“I am angry. The people who did this are supposed to protect us. When I got to the station I saw around seven guys armed with big guns and dressed in black bulletproof vests. Those are the people who shot at my family. If my wife died, the minister was going to be here [Westonaria] making commitments to arrest people. Now that she is alive they [police] do not care. The station commander at the police station has not even called to check up on my wife and how she is doing.

“They only react and counsel families when there is a death. When you survive, you are on your own. You will solve your issue in court,” said Luka.

“It is alleged that members of the crime intelligence unit and JMPD [Johannesburg Metro Police Department] were following up on information of a kidnapping incident in the area. During the operation, the police pursued the suspected car using blue lights and sirens. The car which was pursued did not stop and the police fired shots at the car. Ipid will pronounce on the outcome of the investigation,” said Suping.