Advertisement
The final of the Pipeline pitted Slater against Seth Moniz, a 24-year-old whose father Tony competed against Slater decades ago. With a “frothy Backdoor mutant” and a “well-threaded Backdoor barrel,” per World Surf League, Slater took down the younger competitor to win the Pipeline for the 8th time.
“I was out there telling myself, just be in the moment, no matter how much tension there is. Just breathe,” he said shortly after winning. “I committed my life to this, to all of this. To all of the heartbreak and all of the winning and all of this crap. I’ve hated lots of it, but I just savor this. This is the best win of my life.” 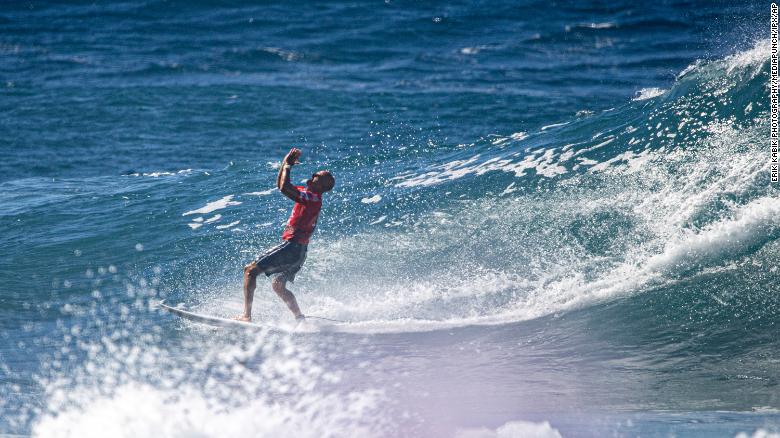 Kelly Slater pictured as he wins the Billabong Pro Pipeline 2022 Surf Tournament at The Banzai Pipeline in Haleiwa, Hawaii. 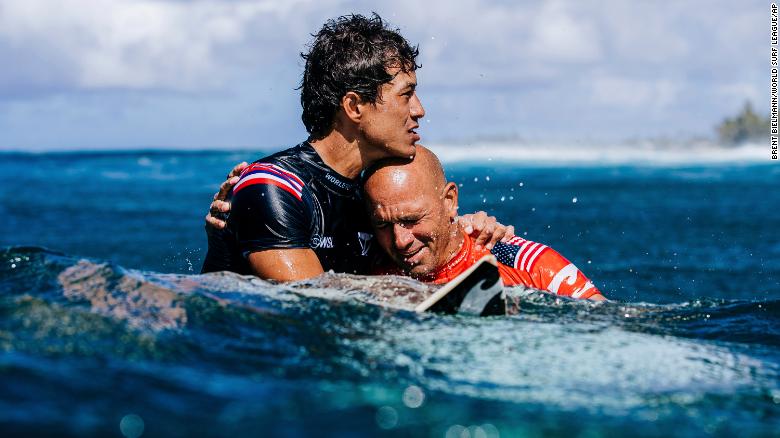 Seth Moniz and Kelly Slater embraced after Slater won the Billabong Pro Pipeline.
The win was the 56th career victory for the ageless Slater over three decades of high-level competitive surfing. He has won 11 world titles and is both the youngest and oldest champion in men’s history, as he claimed the 1992 title at age 20 and the 2011 title at age 39, according to the World Surf League.
The Billabong Pro Pipeline was the first competition of the 2022 season, so Slater now leads the pack for a potential 12th world title.
However, his uncertain Covid-19 vaccination status could impact his hopes.
Two World Surf League events are set to take place in Australia in April and May. As evidenced by the detention and deportation of tennis star Novak Djokovic last month ahead of the Australian Open, the country has required competing athletes to be vaccinated. Slater has not revealed his vaccination status.
“I think we’ve been pretty clear with the Novak Djokovic case of no vax, no play,” Federal Health Minister Greg Hunt said in January to Australian broadcaster Channel 9.
“It’s a pretty simple message, doesn’t matter what sport, we’re evenhanded. I hope he (Slater) gets vaccinated, and I hope he competes.”
READ ALSO;   EPL: Real reason I didn’t sign for Tottenham – Arsenal captain, Aubameyang