The video was recorded by a passerby in Croydon, south London, who caught the officer in the act in broad daylight.

The clip shows the officer stroking his male member while looking at his phone. 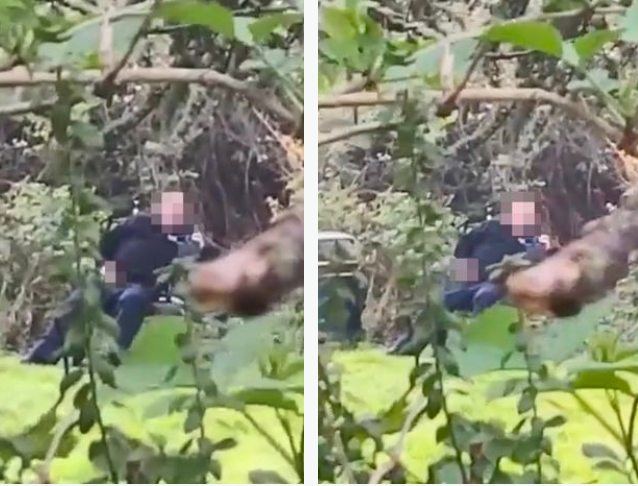 Commander Kyle Gordon of the Met’s Roads and Transport Policing Command has now issued a statement condemning the video.

Commander Gordon said: “I know that everyone will be absolutely shocked by this video. I am absolutely horrified and saddened by incidents such as this, as are all decent officers and staff. They are contrary to everything we stand for.

“I would like to reassure everyone that we are working as fast as we possibly can to identify the full circumstances of what took place.

The PCSO, who is attached to the Met’s Roads and Transport Policing Command, has been arrested after the video went viral and he remains in custody.

READ ALSO;   Marriage is out of my plans for now, I’ll continue putting up my pu*sy for sale – Popular prostitute says in viral video

Commander Gordon continued: “As soon as we became aware of the video just before midnight we acted immediately. Officers worked throughout the night and a serving member of police staff was arrested in the early hours of this morning and taken into custody.

“As a criminal investigation is now under way we are limited in what further details we can discuss. However, we will keep the public updated at significant stages of the inquiry.”

@metpoliceuk care to explain one of your officers having a wank in the park? pic.twitter.com/wqLPGvJyqT

READ ALSO;   A Mexican actress and singer shot dead while waiting to pick up her 11-year-old son from a football academy in the state of Morelos.

Oklahoma Governor Signs Into Law Strictest Abortion Ban In The US

Man Gets Stuck During Bulala With His Friend’s Wife {VIDEO}