Zendaya Reveals She’s Not Pregnant After Trending On Twitter Over TikTok Prank.. The video, which appears to have popped up earlier this week, featured a fake sonogram photo that was photoshopped to look as if the 25-year-old actress had posted it herself.

But the Euphoria star took to her Instagram Stories on Wednesday to set the story straight, complaining that people are ‘just making stuff up for no reason.’

Fighting back: Zendaya, 25, has weighed in after a TikTok prank that claimed she was pregnant went viral, writing in her Insta Stories that people are ‘just making stuff up for no reason’; seen June 8 in NYC

The original TikTok videos were part of a prank called getting ‘Krissed.’

The clips opened with an image of a fake sonogram image showing a fetus, with Zendaya’s profile image photoshopped in to make it look as if she had posted the picture.

‘I love you. Halfway there,’ read the fake caption that was meant to look as if the actress had written it.

A fake comment with heart emojis from Marisa Tomei was even added to make the image look more real.

READ ALSO;   Miley Cyrus top fell off at her 'New Year's Eve Party' so she seamlessly threw a blazer on and kept singing 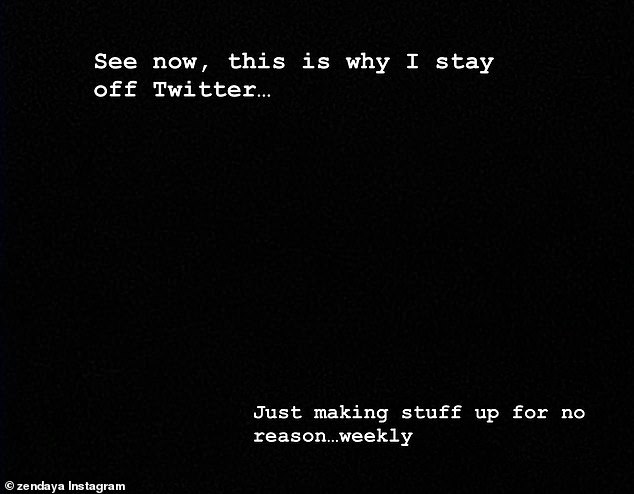 Bad timing: ‘See now, this is why I stay off Twitter…’ she wrote. Although TikTok users understood the pregnancy post to be a prank, it apparently fooled Twitter users after migrating platforms